Stay up to date with the latest marketing, sales, and service tips. 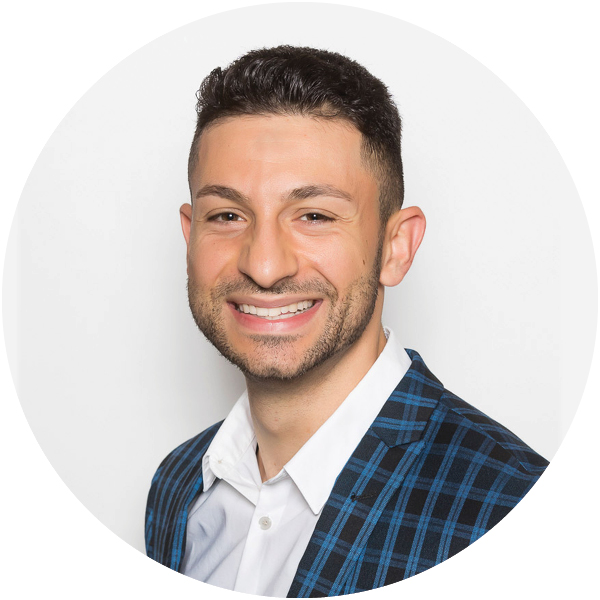 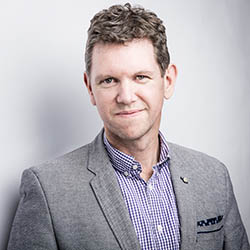 Which CRM is right for your business?

What happens when you add these 7 fields to your CRM?

In July 2013 Qantas' Facebook page posted a very exposing post and not about it's financial losses. A pornographic image made it onto it's page and was online for all to see, including a eight-year-old boy and his father.

Qantas didn't really deal with the matter well, saying that the page was only monitored during business hours and the image is "not too bad". But that's not too comforting for a concerned father, especially considering it was Friday morning when the apparently 'monitoring' was happening. Guess it was a late Friday start.

More about the story: http://www.smh.com.au/digital-life/qantas-sorry-after-boy-exposed-to-porn-20130707-2pkb8.html

If you don't want to be shamed on social media, blogs and the morning news then you must realise that social media is a 24-hour game. It needs to be monitored constantly.

Most social media pages have a method of securing the content that is posted so that it needs to be authorised before being posted. Always check your security settings and who has access to your pages.

Another way we've found to be a useful way to manage content going to your social media pages is to use a posting platform. This way you can have posts scheduled from one place without having to give everyone admin or access passwords.

With this you can also set a chain of command so that notifications or approval can be sent to another team member to verify a post prior to going online.

2. Your Distress is Our Advantage – Big No No!

Using a disaster like Hurricane Sandy to spruik a sale might get a lot of people talking . . . But probably not about the great discount. This may be one of the times you burn a lot of credibility with your customers – not all publicity is good publicity.

This is what American Apparel coped when it chose to send this out: 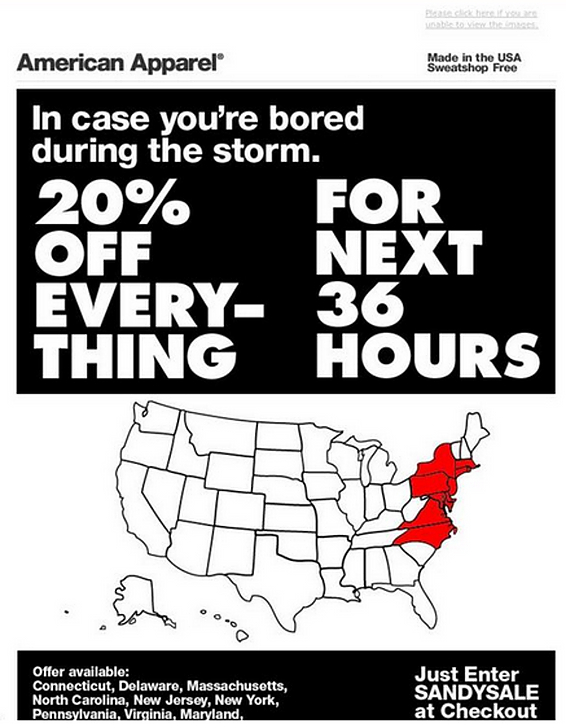 More about the story: https://www.forbes.com/sites/marketshare/2012/10/31/american-apparels-hurricane-sandy-sale-brilliant-or-boneheaded/#31115b685d75

This one is well termed by CJ Hudson, co-creator of Stencil, terming this a Disaster-disaster."

It is well know that direct selling is risky but leveraging a disaster for shameless self promotion is a red flag. It'll turn into a catastrophe you wont get away from the online community unscathed.

Respect, not self promotion is what will show you as a good corporate citizen and will more likely connect with you customers based on aligning values. In general content that is helpful – whether helping people or how it helps you always makes a bigger impact.

Smirnoff Vodka tread in dangerous grounds with what could've been a fun campaign which was to have user generated content showing of the consumption of the beverage with the most liked photo winning a competition.

It's a great way to get engagement and interaction which also forms a community around your brand. But here is where it can go wrong. Some of the images depicted underage drinking and comments of a sexist nature where also posted.

Though it was user generated content it was deemed by The Australian Advertising Standards Bureau (ASB) to be the responsibility of company to oversee and assure content is appropriate.

Social media is an extension of your advertising and is governed by the same industry laws. The responsibility the marketer to ensure that these are adhered to at all times – online and offline.

Other than assuring content has to be verified before becoming visible on your page, you could always manage this through a landing page. The content is sent through, verified by the company, posted and then they are informed to share/like. This will make the process a little more disconnected but it means you wont end up in hot water.

4. Be Wary of your McHaters

In 2012 McDonald's in an effort to share the love launched the hashtag #McDStories. Great experiences, good food . . . and apparently dirty band aids (As one customer posted).

The hashtag actively went viral for only 2 hours before the company directed to another after a flurry of posts depicting less then appetizing stories.

It doesn't take long for a post to be shared or re-tweeted and then start gaining momentum. There are social media tools that can detect sentiment and this will allow you to get on top of it sooner.

I agree with B&T's tip but it is also widely known that there is a very distinct divide between the McDonald's lovers and haters. This was just asking for trouble. Research your customers and sometimes, even if you think you're doing everything perfectly ask them for feedback anyway. #McDFeedback.

In September 2009 TGI Friday's Launched a campaign with a character named Woody who bet that he was the biggest TGI Fan and that if TGI Friday's would reach 500,000 fans by the end of September they would get a free Jack Daniel's Burger or Jack Daniel's Chicken Sandwich.

Well it worked . . . but maybe too well! In 11 days it had already exceeded the 500,000 fan benchmark. So quickly that the aligned TV campaign had not even started running.

Though it achieved what it set out to achieve, the planning was the problem and every step along the way the customers went to town on social media.

First off, they hadn't planned for what the 500,001 follower would receive and onward – the fans took to social media. Second, they increased the number to 1 million fans – but they couldn't fulfill the demand for burgers at all their restaurants. And lastly, Woody was just a character, not a real person. People thought they were helping out a starving actor but were doopted in the end.

The biggest problem of all was that they didn't have a strategy for those new fans and sadly by 2010, woody and all his fans had disappeared.

Tip from B&T and Ours:

Be authentic, if you're going to have people follow a character, then ensure he has an ongoing connection with the brand and strategy to keep people involved.

Timing is everything, so ensure that your campaign strategy can use all media equally. It is often better because of the speed in which we consume information to have all media campaigns align simultaneously.

Plan for worst case scenarios and ensure that you have the processes that can allow for them in that case.

And as B&T wraps it up, that is "Some food for thought no doubt. 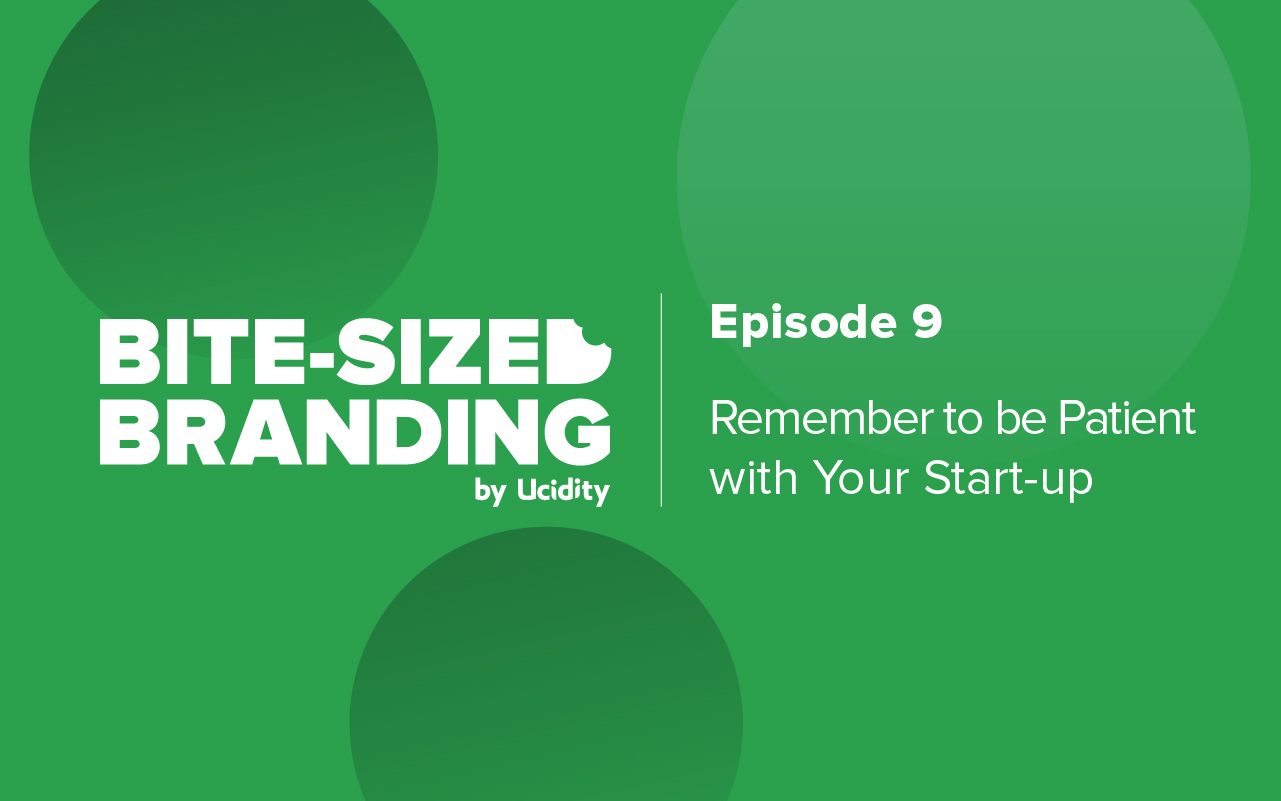 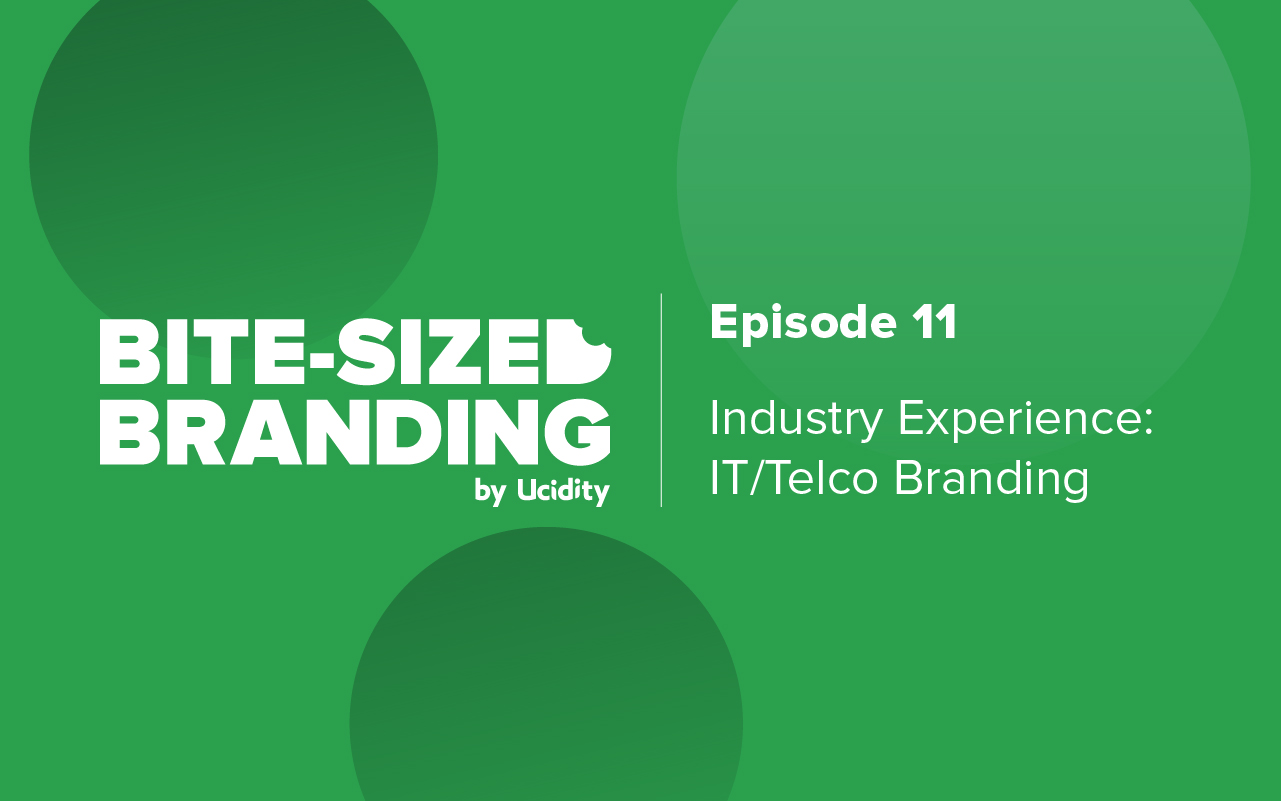 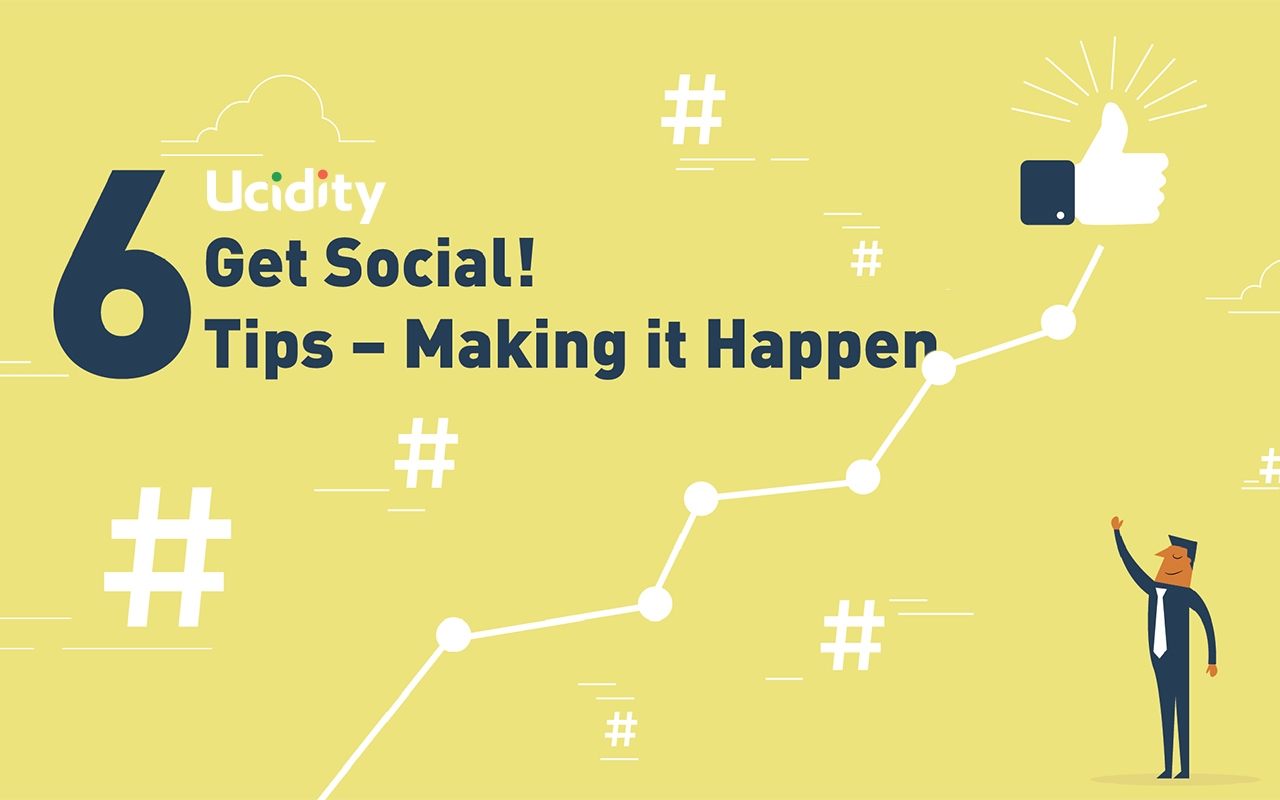 Get Social! 6 Tips – Making it Happen 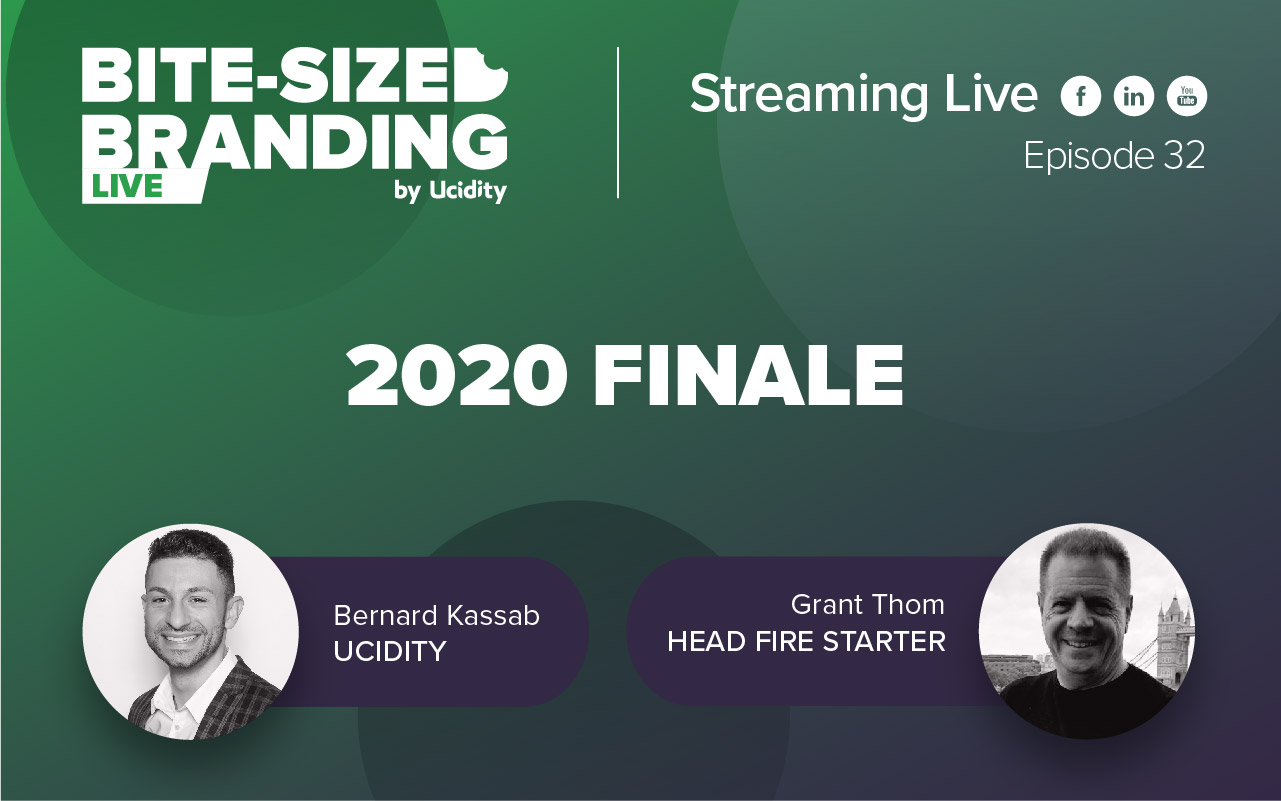